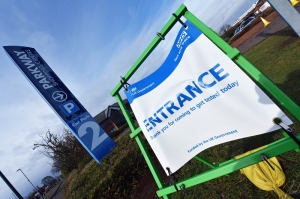 Surge Testing to Continue in Middlesbrough

EXTRA Covid testing will continue in Middlesbrough for a further week.

Around 3,000 adults in the Coulby Newham and Marton areas have so far responded to a call to get tested to help research into the spread of the virus.

Middlesbrough Council is today again urging anyone over 16 from the areas, and those who regularly visit the Parkway shopping area, to come forward.

More staff will be at the site on Saturday to help reduce waiting times. Testing, in car park 2 of the Parkway Centre, will be open daily from 9am-3pm up to and including Friday February 26.

There is no requirement to book in advance, but those attending must retain a barcode they are given so they can register their details afterwards.

"Everyone taking part is doing their bit for Middlesbrough.

"The benefits of this extra testing are two-fold. The programme can help us understand more about variants. It also helps us find asymptomatic cases who had no idea they were potentially spreading the virus."

Middlesbrough Mayor Andy Preston said: "It was bitterly cold last weekend but the people of Marton and Coulby came out in their droves. Thank you to them all. It's really important that people continue to come forward.

Last Friday, on the day extra testing was announced, the town's infection rate was 319. It peaked at 676 on January 5.

Middlesbrough currently has one of the highest rates in the country. Everyone in the town is urged to stay at home and minimise contact with others when they need to leave the house for an essential reason. Face coverings and regular hand washing are as essential now as at any point during the pandemic.

The new Coulby Newham site was set up as part of the Government's surge testing programme, designed to help research into new variants. Extra testing is taking place around the country, including in parts of Manchester and Leeds.

One positive case of the variant first discovered in South Africa was reported earlier this month in Middlesbrough. The case has links to Marton and Coulby Newham.

The new centre, specifically for people from those areas, can be found opposite KFC. The postcode is TS8 0TW.

The following sites in Middlesbrough offer testing for anyone with symptoms of Covid-19:

The symptoms of Covid-19 are a high temperature, a new, continuous cough and a loss/change to the sense of smell or taste. Tests should be booked via www.nhs.uk/coronavirus or by calling 119.

In addition to testing for those with symptoms, Middlesbrough Council is currently offering free rapid tests for people without symptoms. This testing is particularly aimed at those who can't work from home and therefore come into contact with more people.

One in three people with Covid-19 do not display symptoms. Community testing can help find more people who are infected to help to stop the spread.

Community tests can be booked via www.middlesbrough.gov.uk/communitytesting.