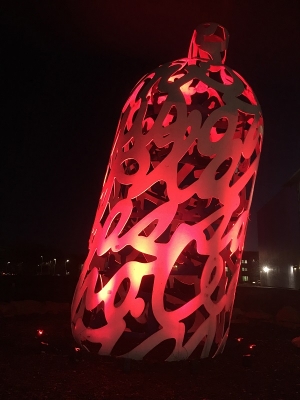 A Nice Bottle of Red to Mark World Aids Day 2019

ONE of the region's best known artworks turned bright red at the weekend to mark World Aids Day 2019.

The Bottle of Notes in Middlesbrough's Centre Square joined landmarks up and down the country bathed in scarlet in memory of all those whose lives have been lost or blighted by the virus.

And the message locally followed the Terence Higgins Trust's ‘#ZeroHIV...are you in?' drive to promote early testing and diagnosis.

The Terence Higgins Trust (THT) is subcontracted by the Tees Sexual Health Service to deliver rapid HIV and other STI testing, especially to those groups at greatest risk of contracting HIV.

Just thirty years ago, almost all those with HIV died, while nowadays almost everyone with the infection lives thanks to revolutions in treatment for those diagnosed in time.

Knowledge of HIV status increases survival rates, improves quality of life and reduces the risk of transmission, while those whose HIV infection is diagnosed late have a ten-fold increased risk of dying within the first year of diagnosis compared with those diagnosed early.

In Middlesbrough late diagnosis rates over the last three years are the fourth highest in the North East at 47.8%. This is higher than both the NE average (42.9%) and the England average (42.5%).

Councillor Dorothy Davison, Middlesbrough Council's Executive member for Adult Services & Health said: "This can be the generation that finally puts an end to new HIV transmissions, and we can achieve that by 2030 if everyone plays their part.

"By working together we can change attitudes, challenge stigma and promote testing, empowering people to thrive with HIV."

For more information visit: https://www.thesexualhealthhub.co.uk/services-near-you/teesside/ or call the central appointment line on 0300 330 1122.

More in this category: Previous Carriageway Café in Christmas Foodbank Charity Drive Next Hitting the Roads with a Motivational Message
back to top