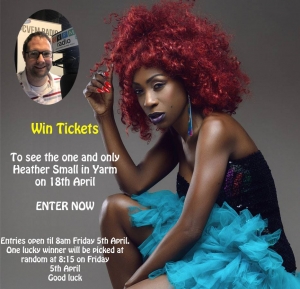 Heather Small, who enjoyed chart success with M People and as a solo artist, makes a welcome return to Yarm’s Princess Alexandra Auditorium on Thursday 18th April 2019 following her storming sold out show in 2018.

As part of M People, with a string of hits including Moving On Up, One Night in Heaven, Search for the Hero and albums including Elegant Slumming, Bizarre Fruit and Fresco achieving worldwide success, Heather became one of the most instantly recognisable and iconic British voices of the 1990’s – soundtracking a whole generation.

She has since enjoyed huge success with two solo albums – with the title track of her Proud album becoming the soundtrack to a host of major events including London’s successful 2012 Olympic bid, the 60th anniversary of VE Day in Trafalgar Square, England’s victory at the Rugby World Cup celebrations, and the official ceremony marking the handover of the Olympic Games from Beijing to London.

Graham Ramsay, of promoters Ten Feet Tall, said: “It’s brilliant to be able to welcome Heather back to Yarm.  I remember the first time I put M People on at The Arena in Middlesbrough back in 1993.  It was the first time they had ever played Moving On Up live and the place went nuts!  She was absolutely brilliant at Yarm last year and I know this is going to be another incredible show.”

Or with a chance to win a pair of tickets listen to CVFM Breakfast, and all you need to do is answer a simple question name us a song that Heather Small has sung in her career.  Post your answer on Facebook or Twitter and share the post/tweet and you'll be in the hat to win the tickets.  Competition closes on Friday 5th April at 8am, and one lucky winner will be drawn at 8:15am, good luck.

More in this category: Previous Producers Needed for Incredible Edible Food Weekend Next Discover Ancient Egypt in Grove Hill
back to top