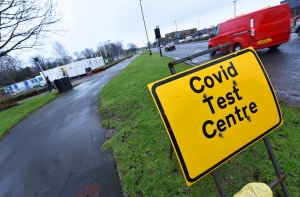 A CASE of the Covid-19 variant first discovered in South Africa has been reported in Middlesbrough.

The positive case is linked to the Marton and Coulby Newham areas. It was identified as part of random sequencing by Public Health England.

Enhanced contact tracing has taken place and there are no obvious links to international travel.

Working in partnership with NHS Test and Trace, Middlesbrough Council is now setting up an additional test centre at the Parkway Centre in Coulby Newham.

Anyone aged over 16 who lives in and around Marton and Coulby Newham, or regularly visits the Parkway Centre, is encouraged to come forward for a test.

The test site in car park 2, opposite KFC on Dalby Way, TS8 0TW, will be open from 9am until 3pm from Saturday February 13.

There is no requirement to book in advance.

All positive tests will be analysed to identify any further spread of the South African variant.

Esther Mireku, Consultant in Public Health, said: "I urge everyone over the age of 16 in the Marton and Coulby Newham areas to come forward for a test. This will help us understand more about the potential spread of this new variant.

"While the overall Covid infection rate in Middlesbrough has now halved from its peak in early January, it has still not decreased as much as we would have liked.

"The high prevalence of Covid in the town, combined with the reporting of this variant, are a reminder to everyone of the importance of staying at home as much as possible and following hands-face-space when out for an essential reason."

Middlesbrough Mayor Andy Preston said: "New variants are popping up in different towns and cities around the country.

"What's really important now is that we establish whether the variant has spread further around Middlesbrough.

"I don't want people to be unduly alarmed. The NHS locally is doing a fantastic job with the vaccine. The overwhelming majority of people in Middlesbrough are doing the right thing and our numbers have halved in just over a month.

"Much brighter days are ahead, but when new variants emerge we've got to act decisively and that's what we'll do with this additional testing."

There is currently no evidence to suggest the South African variant is more serious than others.

Extra testing, in combination with national lockdown measures, will help to control the spread of the virus and increase understanding of the new variant.

Other testing in Middlesbrough

The Parkway Centre test site is being set up in direct response to the case of the South African variant. All those aged over 16 in the Marton and Coulby Newham areas, or people who regularly visit the centre, are encouraged to have a test, even if they don't have symptoms.

The following sites in Middlesbrough offer testing for anyone with symptoms of Covid-19:

The symptoms of Covid-19 are a high temperature, a new, continuous cough and a loss/change to the sense of smell or taste. Tests should be booked via www.nhs.uk/coronavirus or by calling 119.

In addition to testing for those with symptoms, Middlesbrough Council is currently offering free rapid tests for people without symptoms. This testing is particularly aimed at those who can't work from home and therefore come into contact with more people.

One in three people with Covid-19 do not display symptoms. Community testing can help find more people who are infected to help to stop the spread.

Community tests can be booked via www.middlesbrough.gov.uk/communitytesting.