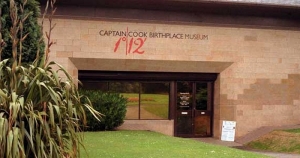 THE anniversary of the birthday of Captain James Cook will be marked with a special event at his Middlesbrough birthplace.

The great explorer will be celebrated at the Captain Cook Birthplace Museum in Stewart Park tomorrow, October 27 – the 289th anniversary of his birthday.

To mark the occasion a VIP event is being held for local schoolchildren who have taken part in a competition inspired by Cook.

Visitors to Stewart Park will be aware of the two totem poles outside the Birthplace Museum. The first is Northwest Coast Canadian created by Tim Paul and Richard Hunt in 1979. The second is Community totem pole created by North East carver David Gross and the local community in 2006.

The competition asked children to re-design the Community totem pole. In total more than 200 entries were received by Middlesbrough Council.

From the entrants, 18 designs were shortlisted and in a fiercely fought competition two winners were eventually chosen.

The result will see the totem pole repainted using half the design of Hannah Wells and half of that created by Phoebe Parnham.

The two winners, three runners up and the remaining shortlisted designers will be viewing the finished repainted totem pole on Friday, October 27 from 11am.

Following on from that a celebration event will be held in Captain Cook Birthplace Museum (CCBM) from 1pm-3pm – all are invited.

Cllr Tom Mawston, Chair of the Captain Cook Birthplace Trust and Marton East representative, said: “We have been delighted with the response from our local schoolchildren and their designs have been fantastic.

“It’s wonderful that we can bring our communities together in ways such as this to celebrate Captain Cook – born here in Marton – who gave so much to the world.”